There are times I find myself sitting alone in the dark going over conversations I had with my father during the days and weeks before he passed. I say conversations, but they were anything but. I would talk and he would gesture – punctuating my sentences, making suggestions, validating an idea or admonishing me for something I failed to do or could have done better with a wave of his hand or by shaking his head.

You see he couldn’t speak. Not unless he was particularly agitated or intensely motivated. It wasn’t that he didn’t want to. He did. But, he had a “tracheostomy tube” inserted into his throat and was on a respirator which left conventional speech out of the question. Nevertheless, he managed to communicate effectively, articulately and even elegantly at times.

One of the most poignant and meaningful conversations we had occurred very near the end and it’s this particular conversation I seem to reflect on the most. I’m not sure what we started talking about. It could have been moving to California in the summer of 1962 or the first few years after opening our Richfield Station in Santa Monica, April of 1966. We could have been talking about opening our own place in Simi, February in 1979. I’m not really sure. We reminisced about things like that a lot toward the end.

It could have been anything, really, I guess. I felt that I could keep him going as long as I could keep him thinking about the things he loved most. Whatever it was, it ended with my father taking the erasable white board that was tied to the handrail on his bed and writing two words: “No regrets…” Then he put down the white board and squeezed my hand.

He was trapped. Exiled to one hospital after another for ten months, breathing through a tube inserted through his throat and into his lungs and fed through another tube surgically implanted directly into his stomach.

His body had been ravaged by an infection he contracted in the hospital during or immediately after a quadruple by-pass the doctors promised would give him at least five more “good” years. What the surgery gave him was a MRSA (Methicillin-Resistant Staphylococcus Aureus) infection that resulted in multiple surgeries, one of which lasted more than thirteen hours.

He survived the surgeries. Weaned himself off the respirator… twice! No mean feat when you are in your early eighties, lived through the depression, served in World War II, came home, started a family, opened an automotive service business, suffered through more than anyone’s share of setbacks and failures, and completely reinvented himself in his mid-forties when we moved to California; and, then again, when we moved out to Simi when he was in his late fifties!

How could that be?

I lived a good part of that life: thirty-eight year of it, standing at his side and I can tell you it was no walk in the park!

I helped start two businesses with him, the first almost entirely on borrowed money. We worked hard and we worked long. We did whatever it took to survive: whatever we had to do.

Whatever else it may have been, it wasn’t easy. And, then we did it all over again fourteen years later. 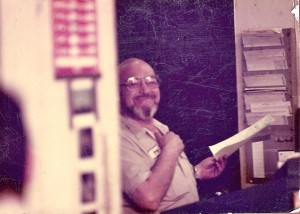 We suffered setbacks and disappointments, failures and – of course – the occasional triumph. But, “No regrets…?”

How do you do that? How can you say that when you no longer have control over anything, least of all your own body?

I’m still not completely sure, but I think my father was trying to tell me that you can say that when you’ve lived your life well: when you’ve worked hard and long in the service of family and friends, and that if you didn’t consider at least thirty percent of your clients family and friends you probably had the wrong clients.

You can say, “No regrets…” when you can look back on your life and reflect on everything you’ve done, everywhere you’ve been, every life you’ve touched, and breath a deep breathe of satisfaction knowing that you could not have done it better and that you probably would not have done it differently.

How many of us can say that and mean it… mean it without trying to fool ourselves or someone else?

Can you? I’m not sure I can… At least, not yet! Not all the time at any rate.

I’m still working on it: working on a lifetime of “No regrets…” But, it’s not easy. It’s not easy and it seems like it’s getting harder all the time.

I think that’s one of the reasons I keep running the tape of those final conversations over and over again inside my head; to remind me that there are some things we should aspire to regardless of how difficult they might be and that arriving at the end of a long life, a full life, staring death in the eye knowing that you would not have done anything differently, that you could not have done anything differently without regret is certainly one of them.