I’d love to be able to show you a picture of the two banners we had hanging from our front gate this morning, but I can’t. 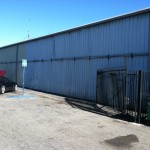 Not because I don’t want to… I do. It’s just that they – “the City” – made us remove the banners because they were in violation of one of our many sign ordinances.

I say that with all due respect… Really, I do! 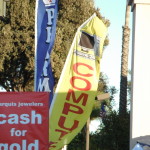 Guess they missed this one…

No one wants to have their property values “tank” because they’re drowning in a sea of banners and signs reminiscent of the Bazaar in a Third World Country! But, in all honesty, our banners weren’t that bad and I say that not just because they were mine.

It is simply a matter of the way the front gate folds up during the day when we’re open. You see the banners folded up with the gate and virtually disappeared during normal business hours. And, because of the way the lot is lit up at night and the fact the fence is some twenty feet from the sidewalk and a solid three or four feet below… they weren’t all that visible after hours when the gate was closed and the banners were facing the street.

Then, why were we warned and almost sited? 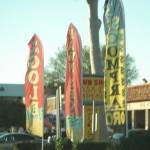 Because, that’s what cities do… and what they do is nothing if not incongruous.

Why, incongruous? Because, incongruous is often defined as inappropriate, inconsistent and/or absurd, bizarre or unsuitable, and in this case it was all of the above.

You see our city is suffering through this languishing recovery just like everyone else is. There have been austerity measures, budget cuts and reassignment of City workers, salary cuts and layoffs. And, yet, the City still has room in the budget for a full-time employee who does nothing more than ride around all day trying to find someone or some thing that is out of compliance and I guess it was our turn to take the heat yesterday. 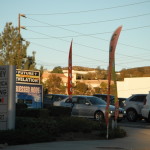 And, of course, this one…

I almost wish you could have been here when he appeared. Actually, I wish I could have been there. But, I was in the ‘back office’ working on one of our scan tools and couldn’t really stop.

After he left, we cut the banners down: something I had actually decided to do last weekIn all honesty, it felt good knowing we were no longer breaking the law, although it’s probably a good idea to break the rules every once in a while. If nothing else, it guarantees that at least one city worker will get to keep his job, even if that one guy is the guy who turned us in!