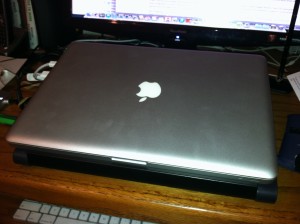 It could be the result of schlepping it back and forth between my home office and the shop every day: stuffing it into my backpack, dragging

it out to the car, throwing it (Not literally, of course…) into the trunk, pulling it out of the backpack and then reversing the whole process every night, five or six times a week. Or, it could be the three or four hours a night I’m chained to it – like a Roman Galley Slave – asking far more from it than any notebook computer was ever designed to give…

All I do know is that whenever that happens, I can always count on the friendly (And, knowledgeable…) folks on the AppleCare telephone hotline as my first line of defense. And, quite frankly, they have never let me down.

In fact, in the two-and-a-half years I’ve had my computer I’ve never had to bring my Mac back (to the Apple store) for anything. This time it was apparent we wouldn’t be able to ‘fix’ the problem remotely. And, while I recognized the need for that next level of help, I wasn’t prepared for what turned out to be an absolutely delightful experience!

If you’re in a service business and would like to take a Master’s Course in Customer Care, head to your nearest Apple Store! You won’t be disappointed…  In my opinion, there isn’t anything else like it anywhere… The quality of service and level of care are unparalleled!

I don’t know how Apple recruits their employees or how they ultimately became part of the Apple family, but I’m sure glad they’ve figured it out and they’re there. I’m glad they’re there, jealous none of them have considered a career in automotive service and disappointed I haven’t been able to recruit any of them to work for me!

My computer’s hard drive failed, which isn’t something most people would look forward to. It’s annoying, unscheduled, time consuming, inconvenient and generally an ‘out of budget’ expense.

However, having already lost a hard drive once before, I was more than prepared this time. I had a backup. Two of them, in fact: one on site and one off.  I was current with most of my work and had another computer available. More than that, I still had “time and mileage” left on the extended warranty I purchased when I purchased my computer.

Nevertheless, my anxiety level was high. I was still anticipating a problem. Bringing your computer is too much like bringing your car in for service for things to go smoothly! And, yet, there were no problems.

I went online and made an appointment for 3:00 PM that afternoon. It was easy and the appointment was confirmed almost immediately. I got to the store a few minutes early, was greeted at the door and escorted to the Genius Bar at the back of the store. My technician appeared almost instantly and introduced himself. He ran a few tests, explained what he was doing and why he was doing it and then explained my options when “FAILED!” screamed across the screen confirming our worst fears.

I was told the computer needed a hard drive and that I would be able to pick it up mid-afternoon the following day after the repairs were completed and the quality control checks had been run. I received a call three-and-a-half hours later informing me my computer was ready for pick-up!

The technician insisted I boot up the computer while he was there. It looked brand new. The aluminum shell as immaculate, the screen perfectly clean and it behaved flawlessly. I went home, set the backup to restore itself overnight, woke up the next morning and got to work!

Everyone I dealt with, whether over the phone or in person at the store was cordial, competent and appeared genuinely interested in exceeding my expectations.

They know how to successfully manage a client’s expectations by under-promising and over-delivering.

I was prepared to pick up my computer the following afternoon. It was ready a few hours after I dropped it off. I was prepared to pay at least a few dollars for the repair, warranted or not. There was no charge. And, I was prepared to deal with the smudges and the scratches sure to accompany opening the computer up and then putting it back together again. There were no scratches or smudges. The computer was returned cleaner and in better condition than it had been prior to drop it off.

Was I satisfied with the service I received? Oh, yeah!

And, just how likely am I to consider another Mac when this one finally does fail? You tell me…

Tell me how can we bring that kind of an experience home to our clients: how we can incorporate that kind of exceptional service into the daily operations of your shop or mine?

Tell me how anyone can…