Did You Know? Service Notes: August 2014 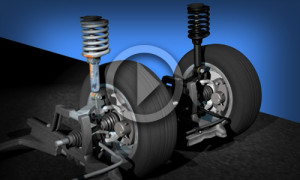 When Do Struts & Shocks Need To Be Replaced

Before we begin a discussion focused on performance degradation and the consequences of worn or damaged Struts and Shocks… And, the fact that “like new” performance is dialed in at the factory for just about 50,000 miles… It might be a better idea to start with a quick explanation of just what a McPherson Strut and/or a Shock Absorber is and exactly what it is they do? The purpose of a McPherson Strut or Shock Absorber is to control spring and/or suspension movement. In other words, the shocks and struts are there to mitigate or dampen road surface irregularities and imperfections: bumps, potholes, dips, etc. They are designed to reduce bounce, sway, roll acceleration squat or braking dip and/or dive.

Now, back to the design life of a Strut or Shock: It’s the truth! Fifty-Thousand Miles of like-new performance is what the factory shoots for when that Strut or Shock is first designed for that vehicle’s front or rear suspension. That doesn’t mean the Strut or Shock is likely to fall apart after just 50,000 miles! But, it does mean that the performance you can expect from that vital suspension component will begin to slowly degrade soon after that mileage milestone has been reached. Slowly is the operative expression in that last paragraph… In fact, the loss of performance is so slight and it takes place over such a long period of time it’s barely noticeable for most people. So, how can you know if or when it’s time to replace your Struts and/or Shocks. Here are a few of the same “Drive Test Tools” we use and the beauty of almost all of them is that you won’t have to drive your vehicle over 5 mph for most of them!

The first is a Quick Acceleration Test… If you’re teaching one of your kids to drive, you won’t have to perform this test yourself. All you have to do is put your son or daughter behind the wheel for the first time, ask them to pull away from the curb and then watch what happens.If you accelerate quickly and the nose of the vehicle “pops” up more than an inch or so, chances are the Struts have lost a good part of their effectiveness.The next test would be a “sway test.” That’s where you move the steering wheel first to the right quickly, then to the left and then back again to the center while moving forward at or close to 5 mph. If the body of the vehicle leans to one side or the other enough to make you uncomfortable chances are the struts and shocks are worn beyond an acceptable standard.The final test would be a quick or abrupt stop. If the nose of the vehicle dips down… a lot, you have a pretty good indication the front struts have lost their ability to control the vehicle’s ride properly.Just a quick note of caution… While all three tests can be done effectively at speeds of no greater than 5 mph, you should still exercise great caution when choosing where and when you decide to perform the test. Large (preferably empty) parking lots and/or deserted side streets work well..And, remember, there really isn’t any reason to exceed 5 mph. So, trying this out while you’re on the freeway in the middle of your morning commute – although, exciting – wouldn’t necessarily be an especially great idea!
Categories: Blog, Consumer, General CommunityAugust 3, 2014
Share this post
TweetShare on Twitter Share on FacebookShare on Facebook Pin itShare on Pinterest Share on LinkedInShare on LinkedIn