Weapons and Warriors…
There are few things more compelling than having a telephone ringtone splash ice water in your face in the middle of the night or the sound you’ve associated with your IM: Instant Messaging, shatter your reverie, rest or concentration. Both alert you to the possibility of something urgent going on somewhere in the universe: something you should probably be aware of.
This time it was the IM ringtone that dragged me away from Meet The Press this morning and the political railing swirling around the latest campaign gaff (Doesn’t really matter who stepped on the landline or even which landline they stepped on does it?). It was our son and daughter-in-law letting us know that Ryan had just finished the race they had flown cross-country to compete in and that for the first time he had finished first in his age group: certainly, worth the interruption.
You see, Ryan is a Triathlete… A three-time IronMan, actually. And, after watching him and the the hundreds (In some cases, thousands!) of other athletes who challenge their psyche and punish their bodies every time they compete, the simple act of finding the Finish Line is nothing less than spectacular! 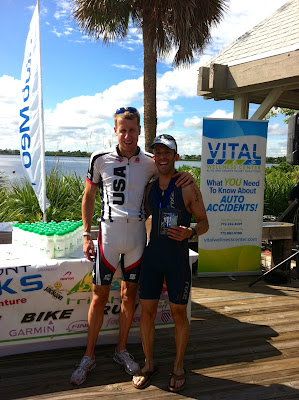 It is especially gratifying in Ryan’s case because he is not a ‘natural athlete.’ Sure, he played soccer and tennis and a host of other organized sports while he was growing up. But, he was one of those kids who had to really work hard to make the team and then earn time on the field at the level he relentlessly pursued. In other words, through sheer force of will. Whatever he may have lacked in genetics, skill or natural ability he made up for in courage, heart and determination.
Because the desire to compete… and, then succeed – please note: I purposely substituted  ‘succeed’ for ‘win!’ – was so strong, he has always managed to persevere and that kind of Warrior’s Spirit has served him well over the years and made him an important part of every organization he has ever been a part of.
There are a lot of parallels between what you and I do everyday and Ryan’s success this morning, perhaps more then even I am aware of.
Champions – Warriors – will succeed when others fail not solely because they have the skill or the ability to win: but, because as, Harvey Mackay, so aptly put it, “they have too much pride to lose.” Warriors will find a way because they don’t stop looking when everyone else has. They will find a way because they never lose sight of what they are fighting for. They will find a way when unforeseen obstacles block the way or their tools or weapons fail them. They will find a way… Or, create a new way, because for them personal failure is not an option.
This morning’s event was as “Olympic” distance triathlon: that’s a one mile, open water, ocean swim followed by 24.9 miles on the bike and ending with a 10-K run (6.2 miles). Ryan competed without the quality tools he has invested in, the tools he is used to and comfortable with. He swam without a wetsuit and competed on a rented bike, not one of the three competition bikes he owns. And, yet, he somehow managed a personal best and a trip to the top of the podium.
There are technicians out there who owe themselves body and soul to one or all of the tool truck driver’s that visit your shop once a week, every week. There are tech’s who must have: can’t live without, the “latest/greatest,” just released, whatever it is that just came out. I know, I was one of them… And, there are others who always seem to get the job done; at times, with far less then ‘the latest’ or ‘the greatest’ whatever it is, because they are constantly investing in themselves – in their training and education: their experience, ingenuity and imagination.
Ideally, you are surrounded by warriors – by, champions – who share their desire and their commitment with you for the benefit of your clients – our clients – the motoring public. They willingly sacrifice their time, energy, effort and resources to maintain a level of personal excellence few who are unwilling to compete at that level will ever understand and in too many cases there is no reasonable, rational reason to drive that kind of performance.
It isn’t for the honor or the accolades. It certainly isn’t for the money. It isn’t even about the competition if you believe that competition has anything to do with anyone other than yourself.
It is all about knowing that you have brought and left everything you’ve got, everything you are capable of in the arena. It’s about satisfaction and personal best.
The best bike, the most aerodynamic helmet, the newest tool or the sharpest blade aren’t the weapons that make the warrior formidable enemy or a force to be reckoned with… Courage, heart and spirit are a true warriors weapons of choice!
Find them in yourself. Perfect them in any and every way you can. Learn to use the wisely and often. Find your way to the top of the podium.
Category: UncategorizedSeptember 23, 2012
Share this post
TweetShare on Twitter Share on FacebookShare on Facebook Pin itShare on Pinterest Share on LinkedInShare on LinkedIn