The Last Place I Looked…

I just spent the better part of two-and-a-half hours looking for a piece of paper, albeit an important one…

I went through my desk in the back office: the office that was my Mother’s not all that long ago… I went through every drawer, meticulously emptying everything; then, putting it all back. I found “stuff” that hadn’t been touched by human hands in a decade! I found “stuff” I’ve been looking for – OK, not all that aggressively – but, still: “stuff” I was actually happy to have found.

Unfortunately, none of it had anything to do with my quest. 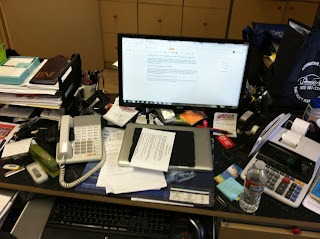 I cast my eyes to the double-wide, sliding door cabinet immediately to my left. Again, I found “stuff” that would actually be considered ‘classic’ in another year or two, other “stuff” that qualifies as ‘antique’ even now. I’ve filled and emptied two five-gallon garbage cans twice. That’s twenty gallons of paper and junk in what’s supposed to be a “paper-less society!”

Still, that one wicked, miserable, folded, “safely stored” and elusive sheet of paper mocks me!

In frustration, I took the cabinet to my right apart: rearranged the binders, threw out more useless paper and more than a few ancient periodicals… I even dusted while I was in there just to make it looked as if someone was actually in there.

People standing at the counter stared at me shaking their heads, wondering… “Who is that maniac in the office? Is he OK? Does he know he’s mumbling to himself? Someone ought to watch him so he doesn’t hurt himself…”

The afternoon summed up in a word: Unsuccessful!

Pretty good definition of a “Vicious Cycle” if you ask me!

It’s my fault… I know it and have no excuse. Explanations, perhaps. But, excuses? None…

You see, I have a bad habit… I write things down to ensure I won’t forget them. 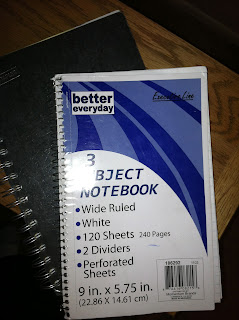 You’re probably thinking to yourself, what’s wrong with that? Writing stuff down so you won’t forget is a good habit, not a bad one. I’d agree, the only problem is how and where I write things down. I collect 6″x9″ notebooks… lots of them.

I’ve always got one with me – Well, just about always. The only problem is because I have more than one and because I tend to leave them everywhere so I don’t have to look for one when I need it, it’s not always the same one I just finished writing in.

That can make consolidation a real adventure and retrieval damned near impossible!

I went home last night thinking – and, writing – about all of this. I gave up my quest and was actually able to reconstruct the information I searched for all afternoon from memory, in part because I had written it down at some point.

I’ll probably continue to look because frankly, I can’t help myself. And, ultimately, I’ll find what I’m looking for. I’m sure of it…

We’ll meet somewhere… Here at the shop, perhaps at an industry event some time in the future and you’ll stop me and probably ask if I ever found that elusive piece of paper and I’ll probably answer, “You know, I did! It was in the last place I looked!”

And, then you’ll probably just stare at me and say, “Of course, it was! How many people do you know who keep looking for something after they’ve already found it!”