A Fresh New Coat of Kindness…

I didn’t want to leave the house today… for anything! Truthfully, I didn’t even want to get dressed.

It’s grey outside, cold – by Southern California standards and threatening to rain – again. 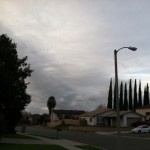 Lesley has decided it doesn’t take very long for anyone living her to become what she lovingly refers to as a “Weather Wimp.” I’ve been here for forty-six years! Consequently, I wasn’t interesting in going anywhere or doing anything.

Did I mention that I just got back to the house after a “Honey -Do,” two-days before Christmas, multi-stop road trip that took me in and out of a half-dozen mall parking lots? So, you can see just how well staying home all day worked out.

Oddly enough, I feel pretty good about it. Not because I wanted to do any of the things on Lesley’s list. Frankly, I had absolutely no interest in doing anything on the list, least of all going through the “temporary” coat rack that lives in the garage. 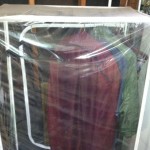 In our house, “going through” generally equals “giving away.” I hold on to everything. I hate to get rid of anything. Consequently,I didn’t see why it had to be done at all let alone at that particular moment.

Observation: This reluctance to do whatever needs to be done whenever your significant other insists it needs to be done appears to be a shared trait common amongst males. It’s so common it should probably be considered a part of our genetic coding! However, it makes infinitely more sense to fight only the battles there’s an outside chance might win and this particular battle wasn’t going to be one of them.

Oddly enough, I feel a lot better for having gone than I would have had I stayed at home all day, regardless of what I might have accomplished working in my office or sprawled out on the couch watching football.

The reason? Those coats I pulled out of that rack in the garage.

You see we dropped the coats off at our first stop, the Burlington Coat Factory in a neighboring community. They have a program that allows you to donate your “lightly used” (translate as: in good condition) coats and jackets to the less fortunate in the community in exchange for a 10% Discount Coupon good for future purchases in the store. In a couple of cases, the winter jackets we donated were like new: barely used at all. And, the 10% discount, while nice – wasn’t much of a motivator either…

The motivator was seeing TWO great, big, cardboard boxes filled with coats: many in the same condition as the ones we had just placed on the top of the pile. The motivator was the weather: temperatures dropping into the low thirties every night, wave after wave of winter storms and the cold, cold rain.

When I was finished with the coats, I looked up for a moment. A woman had bent down on one knee and was saying something to her young daughter. She was smiling: a deep, warm, thoughtful smile. And, she was pointing at my wife and me, explaining what we had just done and how and why what we had just done was good.

It felt great being caught in an act of random kindness doing something good for someone else: someone you’ll quite probably never meet (Although, I know there is at least one jacket I will recognize if I see it on the street: a jacket my wife exiled to the coat rack just so she wouldn’t have to worry about me actually putting it on and wearing it again! I still can’t understand why…).

In the end, I have to admit this was one time it actually felt good to go through the garage, good to find a better use for some of the things we no longer find useful: good enough to take me through the rest of the errands, most of this evening and most of tomorrow I’ll bet…